Before I had published my first book, I had this dream of publication that it meant my work would be out there for other people–strangers even–to stumble across, maybe pick up and read, perhaps even take home to share or revisit later. I had understood that my book would be printed in runs consisting of multiple copies, distributed across Canada, maybe even occasionally abroad, and that people I had never met would actually come to know my words.

However, after my first book was published, a strange thing happened. I immediately came to assume that surely no one other than my friends and family had in their homes the copies my publishers assured me had actually sold. Every time my Amazon Author Central account would notify me that a book had sold in Ohio, I would call my mother to ask who we knew in Ohio–or who we knew who knew someone in Ohio. Every time a teacher would tell me she loves one of my books, I would ask where her own children go to school and if they knew my kids (also known as my greatest sales team!) 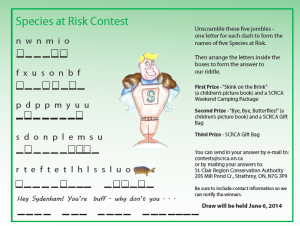 Imagine my shock and surprise when my husband directed me to a competition run by the St. Clair River Conservation Authority, in which Skink on the Brink (now an autographed copy of Skink on the Brink) is being included in the first place prize package–and I know no one who works with the SCRCA!

Imagine my further surprise when Marc found a blog in Tasmania and a posting written by a woman named Maureen who had spent 3 months living in Canada, taking care of her 6 year old grandson, and visiting the library regularly to see what western literary treasures they could find. I’m completely chuffed that Maureen and Gabriel picked as their favourites Skink on the Brink – along with Dr. Seuss’s If I Ran the Zoo, Rob Scotten’s Russell the Sheep and all these other fabulous books. http://cbcatas.blogspot.ca/2014/05/maureens-finds-in-canada.html

So, thank you, Maureen and Gabriel, and the unidentified book-lover in Ohio, and anyone and everyone who has invited my books into their home, for being responsible for helping to make this dream into a reality.