I’ve dabbled some, babbled some,
wandered some, wondered some.
I’m an addle-brained author
and a mind-muddled mum.

Excited to hear from readers that Fierce: Women Who Shaped Canada is popping up at bookstores all over, I decided to set out on a self-directed book signing tour. Over 3 days, I travelled 1141kms, spent 36 hours on the road and visited 34 bookstores in 20 different towns/cities in southern Ontario. The most beautiful of these were local independent businesses located on quaint main streets in small towns or dynamic neighbourhoods within bustling cities. If you’re looking to pick up a signed copy of Fierce, please visit any of the fabulous booksellers listed below:

In Toronto:
Another Story Bookshop on Roncesvalles
A Novel Spot Bookshop in Etobicoke
Book City – both the Beaches and the Danforth locations
Mabel’s Fables on Mount Pleasant
Moonbeam Books in Baby Point
Queen Books on Queen Street East
TYPE Books – both the Queen West and Junction locations 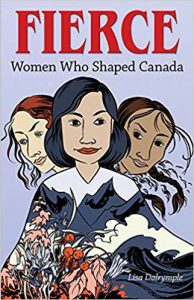