Today I found a magical place.

It’s Sunday, May 8th. Mother’s Day. But my children are not out here on tour with me and so I decided to go out alone and explore my host city of Kamloops, British Columbia.

was told to walk the path by the river and there I would find the labyrinth. It was suggested that the labyrinth is quite special. And so I walked the quiet trail, snapping pictures of goslings to text to my youngest and a picture of the water running high in the Thompson River.

I stood beneath the Red Bridge and was taken

with the beauty of its wooden trusses

–their age and their strength.

But then I came across the labyrinth, a pattern of simple interlocking bricks weaving a circular design on the ground. Still, the plaque told me that “Profound insights and understanding often come upon those who walk slowly with patience and trust.” What did I have to lose? 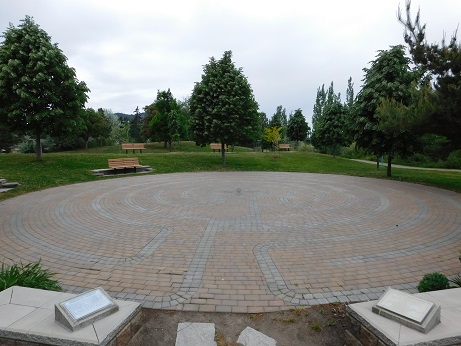 I walked into the labyrinth and followed the first curve. I was going to be taken right around the circle and this was going to take some time. At the second turn, I realized that there were going to be many more turns before this journey was done. I had to be getting back but by now I was committed. Nothing would make me stray from the path and walk across the lines of the labyrinth. I would have to see it through.

As I rounded another bend, a boy arrived on his bike. He was about my daughter’s age and I wondered if she’d received my text pictures. His mother called something to him but I didn’t hear her words. They rode on and a calm came over me, a confidence that taking this journey alone was okay. After a final turn, I came to the centre. I was meant to pause in quiet “to feel and reflect.” But I had also been told to clap my hands and so I brought my palms together. The immediate echo bounced back in a strange peep. I did it again and then turned to look for my children, already saying, “Hey, listen to this!” But they weren’t there.

In that moment, I knew that a part of everything I do, even on my own and for myself, has been done with my children in my mind. And I’m sure it always will be.

I started my journey back out of the circle feeling somehow more alone and yet less alone at the same time. Yes, the labyrinth was quite special to me.

One Response to The Labyrinth